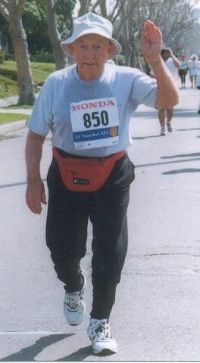 Al Clark began running marathons in his 50s. His love of running and his enthusiasm for helping others learn to “run for the fun of it” made him an inspiration to his friends, family and all of those who had the pleasure to run alongside him in the WRM and other races around the country.

In loving tribute to Al’s dedication, determination and love for running, the Whiskey Row Marathon Committee honors one runner each year who exemplifies some of the characteristics that best defined Al as a man, a runner and a friend. 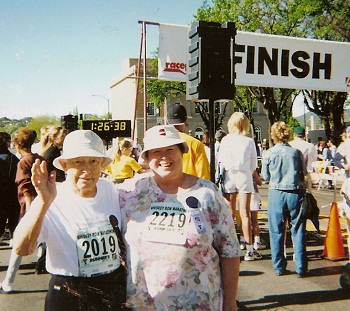 Al started running track in high school in Orange, California. He was an excellent runner and almost made the 1932 Los Angeles Olympics and started running marathons when he was in his 50s. Al would train by running from his job in LA County to his home in Orange. While running home from work before dawn, Al was stopped several times by the police as a suspicious character possibly running from the scene of a crime. The LA police could not believe what he was doing and began keeping an eye out and offering him protection from time to time. Al joined a senior track club at Chapman College in Orange and did some long distance relay races to Las Vegas, sponsored by one of the big hotels. In 1976, the relay team ran across the United States with only 5 members on the team. He ran two marathons at the age of 75 in a period of two days with a finish time of 3 1/2 hours each. Al loved to run and never pushed himself too hard. There were many races where 30 and 40 year olds came in and collapsed, while Al would come in with a group of runners who had been chatting with him the last 5 miles.

Whiskey Row Marathon
Al Clark loved the Whiskey Row Marathon and all of the runners who came year after year. You could always find him at race headquarters the night before the race reminiscing about old times. Initially, Al would register for the 5:00 am early start. As years went on, 5:00 became 4:00 and then 3:00 so that he could cross the finish line by noon.

Prescott Police and Fire Department would take bets as to whether Al would finish each year. Some of them would razz him saying “give it up old man, we need to open the road”. That would spur him on at just the right moment. The race announcer would always say “Here comes Al Clark” as rounded the last corner. The enthusiastic crowd would greet him with a thunderous applause welcoming him across the finish line.

Al was an Inspiration to All
Al encouraged one young Yavapai runner who had been in a car accident to “run for the fun of it” and not just to win. Al inspired many runners to run for fun by his dedication and determination to continue running until his death in 2003. Al’s running reflected his love and respect for nature. Al was a keen observer and admirer of native plants and would share his knowledge with anyone who was lucky enough to catch him standing still. 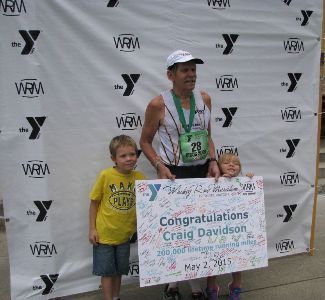